Iceland in Winter – a Journey Around the Country’s Ring Road. 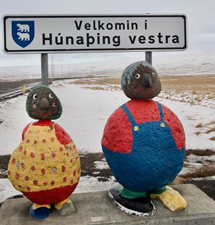 Iceland, an island nation in the North Atlantic, is about the size of Kentucky but with only 365,000 people. It has captured the imagination since its settlement by the Vikings a thousand years ago, and now welcomes over two million visitors a year. While most tourists arrive in the warm months, the lecturer, Barry Pell, drove the entire circumference during the challenging winter weather season. At that time, Iceland’s attractions – its volcanoes, steaming hot springs and geysers, towering glaciers, black lava fields, and remote farms and churches – are dusted and glazed in a winter wonderland of snow and ice. Adding to this the wild reindeer herds, the hardy pony-sized Icelandic horses, and the surreal colors of the Northern Lights make winter a very special (and uncrowded) time to see the country. The program will be accompanied by Mr. Pell’s photography.

Barry Pell is a world traveler and photojournalist. He has traveled widely over five decades, visiting and documenting landscapes and cultures in 170 countries and on all continents. Mr. Pell has also lived and traveled in China, Eastern Europe, North Africa, and South America. He currently lectures on international cultures at schools, universities, and institutions in the Boston area.